What are the complications of total hip replacement ?

Total hip replacement is one of the most reliable surgical procedures performed today.  The procedure has been shown to have extremely reliable results in terms of pain relief and increased mobility, with good longevity.  As such, the chances of there being any type of complication is very small.

There are a number of complications, however, that should be mentioned.  While these are significant, as above, they are uncommon.

It is very important to feel that all your questions and concerns have been addressed well in advance of the operation.

The potential complications are:

Infection is one of the major concerns following any type of implant surgery.  Thankfully it is extremely rare following joint replacement surgery.  Extensive measures are taken before you come into hospital, prior to and during the operation and during your early rehabilitation to reduce the chances of there being a wound infection.

While superficial wound infection is a worrying concern, it may be possible to settle this down with antibiotics.  Clearly the more major concern is when infection becomes deep and infects the joint replacement itself.  This is truly a major concern.  Infection in the joint can result in pain, swelling and discharge from the wound.  Whilst the majority of infection occurs soon after surgery, late infection can occur typically after an infection elsewhere in the body, such as dental or skin infection, urinary or chest infection.  Late infection again can result in pain, swelling and sometimes redness but, importantly, it can also result in early failure of the implant.

While the overall infection rate varies, a figure of between 0.25 and 0.5 per cent would be fairly standard.  I work hard to ensure that infection rate within my own practice is considerably lower than this, despite the complexity of my work.

There are measures that can be taken to reduce the infection rate.  At the time of surgery great care is taken in the operating theatre to ensure that all the instruments and surroundings are sterile.  Surgery will take place within a ‘lamina flow’ theatre which has been shown to reduce infection.  Prior to undertaking the surgery you will be given a dose of prophylactic antibiotic, which will continue to be given early after surgery.  A special occlusive drape is used around the limb and your leg would be pre-prepared in the anaesthetic room.  An alcoholic skin cleaning solution will be applied in the operating theatre to reduce the chance of any contaminant from your skin getting into the operation during the surgery.

Dislocation is a potential complication of hip replacement surgery.  Hip dislocation occurs when the femoral head becomes dislodged from the socket.  While this is relatively rare there are historical studies reporting dislocation rates of up to 3 per cent following primary total joint replacement, higher in hip replacement for more complex conditions and indeed in revision surgery.

There are a number of things that can be done to reduce the chances of dislocation.

It is important that implants are chosen carefully and then positioned accurately in the most appropriate orientation for each patient. The soft tissues surrounding the hip should be balanced well.  The surgeon can reduce the chance of dislocation by increasing the size of the head used or changing the type of acetabular liner chosen.  Very careful consideration needs to be taken to soft tissue repair following surgery.

Beyond that, there are activities that patients need to be careful about.  The hip is most at risk when the patient bends the knee up, beyond 90 degrees and internally rotates the hip, (such that with the knee moves towards the midline).  What is an acceptable range of movement following hip surgery, and indeed what are acceptable activities, should be discussed with the patient prior to surgery.

The rate of dislocation in primary hip replacements within my own practice is considerably lower than average and, while this will always remain a significant concern, with carefully planned and performed surgery, it is not something that I think patients should be unduly worried about.

Unfortunately, patients can develop clots following hip surgery.  The frequency of this is not fully understood.  It is not uncommon for patients to experience some swelling early after surgery but unfortunately a number of patients will also develop clots (thrombo-embolic disease).  Clots that occur in the leg (deep venous thrombosis or DVT) typically below the knee, result in calf or leg swelling, redness and discomfort which can compromise rehabilitation.  Frequently this swelling will not settle overnight when the leg is elevated. Unfortunately, the more major and significant risks occur when clots in the leg become associated with clots in the lung (pulmonary embolus or PE). This can be a much more sinister concern.

In order to reduce the rate of clots we use regional anaesthetic techniques which have been shown to have a beneficial effect.  Similarly, we try to mobilise patients as soon as is possible after surgery.  Beyond that, it is my practice to use low molecular weight heparin injections, starting very soon after surgery and continuing for a period of four weeks, after surgery.  I also ask patients to use thrombo-embolic deterrent (TED) stockings.  These have the double effect of trying to reduce swelling but also help in reducing the rate of deep venous thrombosis.

There are a number of nerves around the hip that can be injured during surgery.  The most common nerve injury occurs to the sciatic nerve that lies posterior to the hip and, specifically, to the common peroneal branch of the sciatic nerve.  Injury can occur secondary to the retractors used in exposing the hip but also with direct trauma to the nerve.  Injury can also occur with no demonstrable trauma, possibly if the nerve is twisted or pulled during the procedure.  If the common peroneal nerve branch of the sciatic nerve is injured this can result in a patient’s inability to lift the foot and ankle up, along with numbness in areas of the foot and below the knee.  While the majority of these concerns are temporary and the patient will recover, there is a very small incidence where this type of nerve injury can be permanent, resulting in a ‘foot drop’ which can require the patient to use a splint.

Other nerves can be injured around the hip, particularly the femoral nerve.  This is a less common injury but can result in weakness in straightening the knee which of course can inhibit mobilisation.  Again, the vast majority of cases settle over time with physiotherapy but this can be permanent in very rare circumstances.

Nerve injury is more common in more challenging surgery or surgery performed for more complex underlying indications. If there is a specific or increased risk this should be discussed prior to surgery.

The above are the four major complications that can occur following hip replacement surgery.  While each and every one is a major concern they are extremely uncommon and typically, with a standard total hip replacement in a patient with no significant complexity, I would expect the incidence of such complications to be in the order of 1.0 to 1.5 per cent, ie I would expect to be able to give a patient a 98.5 to 99 per cent chance of coming through surgery with no cause for concern whatsoever within my practice.

There are other complications that are less common that can occur following hip surgery.

Similarly, there is a possibility that leg length inequality can occur following surgery.  From that point of view, my practice is to template and plan surgery very carefully.  Specific scaled x-rays are performed prior to the surgery.  Computer-based planning is then performed to ensure the procedure is performed as carefully and as accurately as is possible.  It is important that the hip replacement is sound and secure with adequate soft tissue tension to reduce the chance of dislocation.  This can sometimes leave the patient’s leg very slightly longer, although troublesome or clinically significant leg length inequality is uncommon and I would not expect this to be a concern.  Many patients’ legs are slightly short prior to surgery as a consequence of the wear and often patients’ legs will feel very slightly tight or longer after the operation as a consequence of this.  Any sensation of lengthening should settle over time and, as above, I would not expect patients to feel any significant difference in the legs following the procedure.

Unfortunately, there are some particularly complicated conditions in which leg lengthening is more common.  If there are complexities around the underlying diagnosis this will be discussed with the patient prior to the procedure.

The major reason why hip replacements fail over time, over and above the complications listed above, is wear.  Wear is likely to occur in any bearing surface over time when one surface articulates against another.  Clearly the consequences of wear depend on the rate at which it occurs but also on the biological response to the debris created.  It is this physiological response that can result in damage to the surrounding soft tissues in the bone. 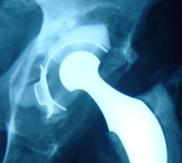 Loosening in a cemented socket with surrounding bone damage

Damage to the surrounding bone can result in loosening of the implants.  It is this loosening in the absence of infection (aseptic loosening) which is perhaps the most common cause of failure requiring revision hip surgery.

Examples of wear in a polyethylene bearing surface are demonstrated here and show catastrophic failure in an uncemented liner.  The polyethylene has disin

tegrated and the titanium metal shell itself has been damaged resulting in surrounding bone destruction.