The concept of hip resurfacing is not new.  In fact, hip resurfacing implants were used as early as the 1950s and 1960s as surgeons tried very hard to reduce the amount of bone that was removed at the time of joint replacement; the idea being both to preserve bone for any subsequent revision operations that might be required, particularly in young patients, but also to try and effect a more physiological reconstruction of the hip.  Unfortunately, the results of historical resurfacing using less durable bearing surfaces such as polyethylene, Teflon™, ceramic and metal bearing surfaces were not always reliable.

In the 1990s there was a resurgence in interest and development of hip resurfacing, specifically surrounding metal-metal hip resurfacing, both in America and indeed in the UK, centred in Birmingham.

The Birmingham Hip Resurfacing (BHR as we now know it) was first implanted in 1997. 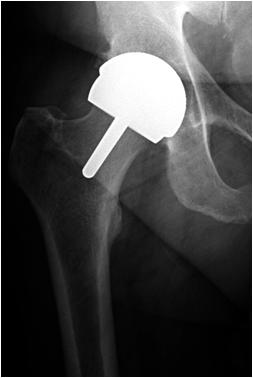 Birmingham Hip Resurfacing (BHR) There is no stem into the shaft of the femur. The femoral neck is retained and the head re-shaped to articulate with a metal socket carefully positioned in the pelvis

As can be seen in on this x-ray, the basic concept of the procedure is that instead of removing the top part of the femur and implanting a stem into the shaft of the bone, the top of the bone is re-shaped to allow a spherical metal implant fixed with bone cement, to replace the areas of the femur that were damaged by osteoarthritis.  This, therefore, preserves the entire proximal femoral shaft for any further planned procedure.  Simultaneously, an uncemented acetabular component is positioned carefully into the pelvis using a similar technique to that used in a total hip replacement.  This results in a ‘metal against metal’ bearing surface.

The theoretical benefits of hip resurfacing are to reduce the amount of bone removed at the time of surgery, to facilitate any further procedure required during the patient’s lifetime and to effect a more physiological loading of the patient’s proximal femur.  Using this larger head size (more similar to the normal head of the femur) has been shown to reduce the rate of dislocation of the hip when compared to a more traditional total hip replacement.  This, alongside the expectation that the metal on metal (MoM) bearing would prove more wear-resistant in young and more active patients, provides the potential for the patient to be able to return to, and enjoy, more active recreational and occupational activities after surgery.  Some of these activities might be a concern following more traditional hip replacement.  This ability to return to more active sports has been demonstrated with a number of high-level athletes successfully able to return to sport after hip resurfacing surgery for severe arthritis.

The procedure itself is sometimes thought of as a ‘lesser’ option.  Certainly it could be viewed as being less invasive with regard to the bony skeleton.  In my opinion, however, hip resurfacing is a more extensive procedure involving a more extensive surgical approach and requiring an increased amount of soft tissue release around the hip.  This is as a consequence of the fact that with the femoral head and neck preserved, the surgeon still has to mobilise the femur sufficiently to gain good access to the socket.  (With a total hip replacement the ‘top’ of the femur has already been removed.)

It is particularly important to get good access to the socket to ensure that the component is placed in perfect alignment in the pelvis.  A slightly increased amount of soft tissue release is therefore required.  All of the above can, in my experience, lead to slightly increased discomfort and swelling acutely following hip resurfacing surgery.

Hip resurfacing in my practice is aimed at the younger and more active patient group.  Typically male patients are in their forties and fifties.  Femoral neck fracture, most commonly occurring within the first six months, is one of the more common complications following this procedure.  As the technique relies on the patient’s own proximal femoral head and neck, the operation can only be considered in patients with good bone quality in the proximal femur.  If there is any concern about bone quality, one would be less likely to consider hip resurfacing.  Sometimes we will plan additional scans to investigate bone quality further before a decision is taken regarding the suitability for hip resurfacing.

Over the years, I have had extensive experience with hip resurfacing, using the BHR and carrying out my first procedure in 2000.   I travelled to Birmingham and was taught to perform the procedure by the developing surgeon, Mr Derek McMinn.  My results with the BHR have been good.  My experience, over more than 20 years, initially with the BHR and more recently with the only other MoM hip resurfacing implant available, the Adept®, has been similar to the reported literature surrounding the implant from both designer surgeon and indeed national registers in the UK and elsewhere, such as the Australian Joint Registry.

Unfortunately, the results of resurfacing have not been as good in some patient groups as in others.  Specifically, the results have not been as good in women and in patients with smaller hips for reasons that we do not completely understand.  The importance of accurate component orientation is now more widely recognised.  Thus, optimal surgical exposure and technique is crucial to obtain good results with this procedure.