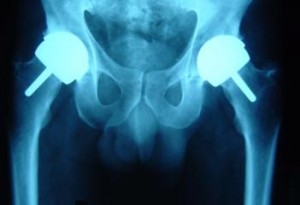 The most common complication following hip resurfacing surgery is femoral neck fracture.  Fracture can occur at any time but is most common within the first six months with an increased risk acutely following surgery, within the first three months.  Fracture will typically occur secondary to trauma but can be related to poor bone quality and also can occur if there is damage sustained to the femoral neck at the time of the procedure.  Typically, however, this would be identified at the time of the procedure with an intraoperative decision then taken to convert to a total hip replacement at that stage.

Fractures of the femur can occur during and after all hip replacement surgery and it is important to appreciate that femoral neck fracture is uncommon after hip resurfacing. The management of a fracture will depend on the nature of the injury, the time since surgery, the location of the fracture relative to the femoral neck and to the component and how well the metal-metal bearing is functioning at the time the fracture occurs.  While historically following femoral neck fracture a stemmed implant with a large metal head was used to articulate with the existing acetabular component, at this stage femoral neck fracture is likely to require revision of the hip resurfacing to a total hip replacement.  This procedure would involve removal of the acetabular component alongside a procedure on the femoral side to exchange the fractured femoral neck and insert a stemmed femoral component, typically resulting functionally in a primary-type hip replacement.  In the absence of any associated metal on metal wear process resulting in soft tissue damage, the outcome following revision of hip resurfacing for fracture to a more traditional total hip replacement is typically good.  One would expect the patient to return to a very good level of functional activities following this procedure.

Metal-metal hip resurfacing, using either the Adept® (Matortho) or the Birmingham Hip Resurfacing (BHR, Smith & Nephew), is now performed only in men and indeed is limited to patients with a femoral head size templated to be 48 to 50 mm and above.  The best outcomes have been reported from the Registry and surgeon series results with this device in that particular patient group.

Other factors surrounding hip resurfacing are that the procedure itself requires a slightly increased surgical exposure involving a slight increase in the amount of soft tissue that is released around the hip.  This can result in a slight increase in swelling and discomfort acutely following the surgery.  This would typically settle quickly and, in my experience, patients who have had hip resurfacing and who have had hip replacement look very similar at around six weeks from the operation as they start to rehabilitate more definitively.

The issues that surround abnormal wear reactions to metal-metal debris are detailed elsewhere.

Previously, I did use the BHR in female patients and indeed patients with slightly smaller hips and my own personal experience in these patients remained good.  While I have had to revise a small number of patients for a number of indications, including where they had developed an abnormal reaction to metal debris, the number of patients who have had BHRs within my practice who have then required revision is small.  As detailed above, at this stage my use of metal-metal hip resurfacing is limited.

Overall, the patient and the surgeon need to be clear that the potential benefits of using hip resurfacing technique (bone stock preservation on the femoral side, more physiological loading of the proximal femur, reduced dislocation rate and the possibility of enhanced physical activity following surgery) with the slight increased risks of hip resurfacing over a more traditional hip replacement, would outweigh those theoretical risks.

For all these reasons, the number of patients in which the hip resurfacing procedure is truly indicated remains, in my opinion, relatively small.